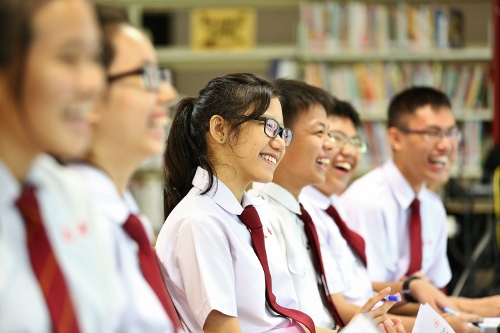 Singapore Education System, the most recent Trends in International Mathematics and Science Study (TIMSS) report and Programme for International Student Assessment (PISA) rankings confirm that Singapore has become an educational super power, with graduates from the nation’s education system years ahead of most students in Europe and North America. So what is it, that this Southeast Asian city-state is doing right? What lessons can be learnt? And how easily could other countries duplicate Singapore’s success?

For a decade, Singapore has been at or near the top of international leagues tables which measure student achievement in literacy, numeracy and science. The country’s success story has caught the attention of educators and policymakers worldwide, who are hoping to learn from Singapore’s achievements and replicate the country’s high academic standards.

What makes Singapore’s success story all the more interesting is that academic standards had previously been low. During the colonial period, Singapore’s education system was elitist and segregated according to ethnicity and religion. In 1965, when Singapore gained independence from Malaysia, the country’s per capita income of $500 was typical of a Third World country. However, the country’s leaders wasted no time in introducing a universal state-funded education system which promoted the ideals of meritocracy. Education has remained at the forefront of Singapore’s vision for development and the country’s per capita income has since grown from $500 to $55,000.

Initially Singapore’s education system was typical of much of Asia, highly-scripted and uniform across all levels. The pedagogy of those early years was very much the teacher-centered ‘chalk & talk’ approach. It wasn’t until around 2004 that things changed and Singapore’s pathway to educational success began, as the country adopted a more student-centered approach to learning. This was achieved through the introduced of a new educational vision for the country, ‘Thinking Schools, Learning Nation’ which focused on the quality of learning rather than the quantity of learning.

The ‘Thinking Schools, Learning Nation’ reforms were developed during the aftermath of 1997’s Asian financial crisis, and as the world economy began shifting towards a knowledge economy. This new approach which focused on innovation, creativity and lifelong learning, was designed to meet the new challenges of the 21st Century workplace and ensure Singapore’s continued competitiveness in the world of business and commerce.

The ‘Thinking Schools, Learning Nation’ became an umbrella programme under which a wide range of initiatives were tailored to the needs and abilities of Singaporean students. The country’s solid foundation in literacy and numeracy can be attributed to the adoption of two highly successfully education innovations during this period, the Mastery Method for Mathematics, and the STELLAR approach to English.

Singapore’s Mastery Method for Mathematics instruction has gained admirers around the world. The approach enables students to spend ample time focusing on core principles of Mathematics through a range of activities such as problem solving exercises which utilize visual and hands-on aids like blocks, cards and bar charts. Students are required to become proficient at each step of their learning and they do not move on until they have thoroughly mastered each topic.

The STELLAR approach encourages students to improve their language skills through interactive lessons which incorporate drama techniques and role-play. Teachers who use this approach confirm that it helps students to understand what they have read, evaluate stories and communicate their thoughts, it also makes learners more confident and fluent.

Developing high quality teachers was an essential aspect of the ‘Thinking Schools, Learning Nation’ programmes and Singapore’s educational success has a lot to do with the country’s ability to develop highly proficient educators. This has been achieved by capacity building through selection, training and professional development.

Selection: Prospective teachers are carefully selected from the top third of high school graduates. Strong academic ability and a passionate commitment to education are essential traits for all individuals hoping to become teachers.

Training: All teachers receive training in the Singapore curriculum at the National Institute of Education (NIE). During each graduate’s first few year in the actual classroom, there remains a close working relationship between NIE and the schools where the new teachers are mentored to ensure the graduates receive the support they need to succeed.

Compensation: Compensation is another important aspect of developing and maintaining educational professionals, and Singapore’s Ministry of Education monitors occupational starting salaries and adjusts the salaries for new teachers to ensure that teaching is considered prestigious and financially rewarding.

Following Singapore’s education reforms, major changes were also made in the management of schools, moving away from centralised top-down management structures towards a more distributed vision of leadership where schools and districts were given greater autonomy.

Policy makers in Singapore recognise that high-quality teaching and strong school performance require effective leaders. To ensure the most suitable individuals are given leadership responsibilities, teachers in Singapore are assessed regularly during their formative years to see which career paths best suit them. Teachers who have the potential to become school leaders are identified and selected for interviews. Those individuals who pass initial leadership assessment mover to NIE to undertake a six months executive leadership training programme.

Singapore’s approach to leadership, identifying and nurturing talent, is modeled on leadership development practices deployed by large corporations with the adopting of a “select then train” rather than the “train then select” model.

Singapore’s unique location, at a centuries-old international trading crossroads, has created a diverse and rich culture. Furthermore, the country institutions commitment to equity and meritocracy, a cornerstone philosophy of Lee Kuan Yew’s government since independence, encourages hard work and self-improvement.

Much of the Singaporean population also adhere to Confucius ideals which regard education and diligence highly. Most parents in Singapore take their children’s education very seriously, and will strive to give their children the best possible opportunities, providing them with educational resources, books and private tuition. Furthermore, parents’ high expectations encourage students to set themselves high expectations and this tends to breed success.

So, can Singapore’s success be mirrored? –

Well, the county’s s uniqueness also makes attempts to mimic its success a challenge. Firstly, it is important to remember Singapore’s small size, with just over 500,000 students and less than 400 state schools, implementing reforms and new initiatives on this scale is far easier than in larger countries. Furthermore, the stability of the Singaporean government and a shared vision for education, have given the city-state a degree of stability rarely witnessed elsewhere.

Despite these unique factors, there remains aspects of Singapore’s success which can be adopted by other countries. Already, Singapore’s approach to teaching Mathematics is popular in North America, and the Stellar method for English language instruction is also gaining popularity among educators at international schools. There is no reason why these educational approaches can not reap rewards outside Singapore.

One final factor which a number of government’s would benefit from replicating is the support the Singaporean education system provides to its teachers. By consciously seeking to recruiting high-quality individuals, and providing them with good training and support, teaching has developed into a competitive and well-regarded occupation. It is now considered an honour to be a teacher in Singapore. The benefits of this are huge, and it’s difficult to underestimate the impact this factor has on Singapore’s superior levels of educational achievement. Any government looking to improve their country’s ranking in international assessments would do well to start with providing better support for the country’s teachers.